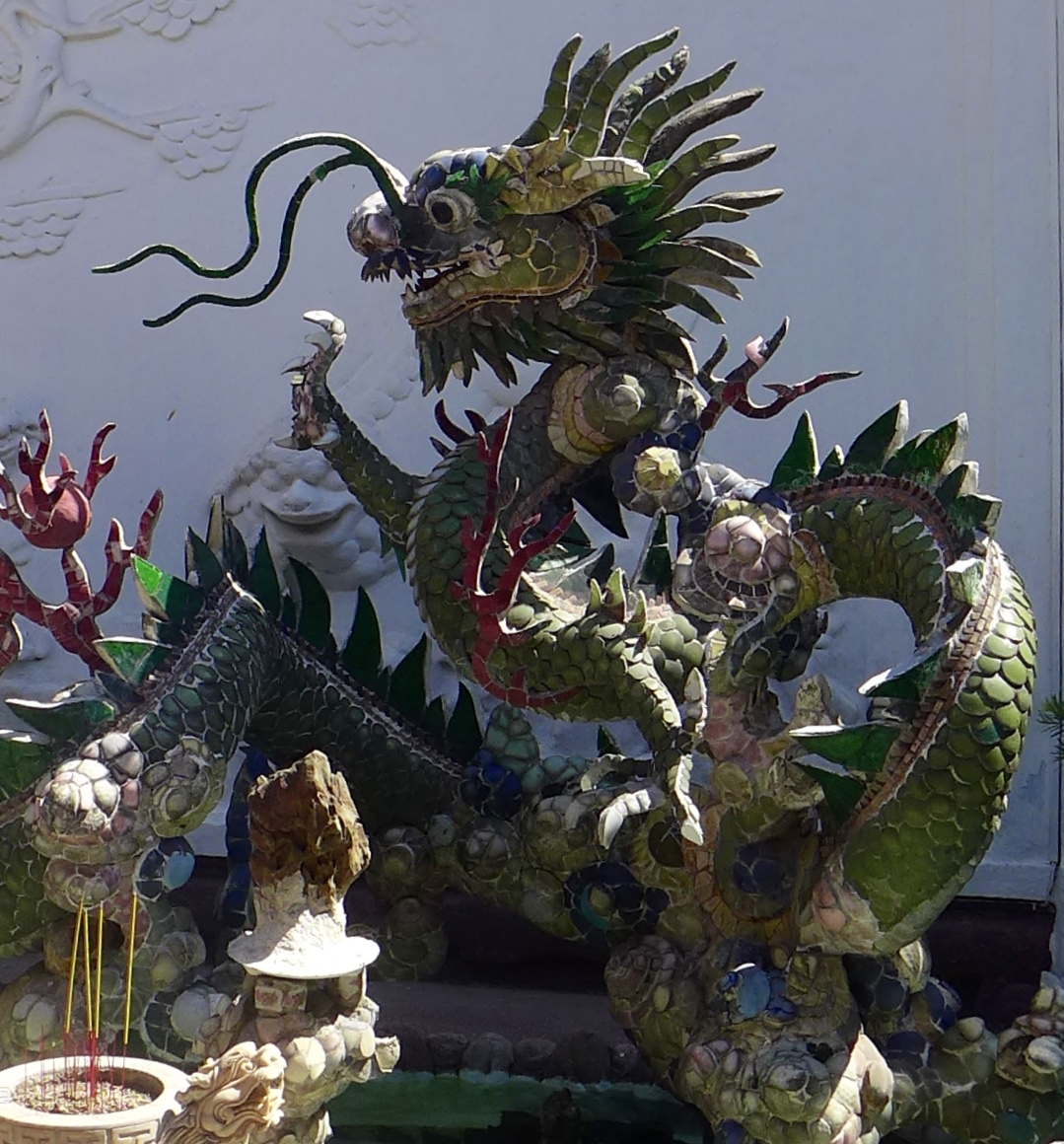 There must have been a spotlight that reveled the location of my beastly nemesis.

A special light only beast tamers who prowl the streets of the Old Quarter in Hoi An, Vietnam can see.

Mackenzie and I had just exited a cultural show.  We stood on the curb laughing and discussing what we had just seen.

Suddenly, like magic a short woman appeared before me, thread in hand.

Shocked at the sudden invasion of my personal space, I stepped back only to be met with a wall of  tourists spilling out behind me in what seemed like the hundreds.  Most of them stopping to see what this lady was saying and trying to do. I became the encore show.

She was quick with that thread, there it was traveling along my chin with such deft, such incredible speed.

“Oh! So many long hair! I do this one for free” she shrieked.

Confused, I thought, “what is she doing?”

Then I felt the beast rip from my skin. How did it come back so fast? How many ARE there??

Now swarmed with onlookers, I felt heat flood to my face; sure I was turning as red as the string of cloth lanterns that hung above my head.

I tried to get away, I tried to run but she was quick on her feet. She had caught me in her threading web.

There was nothing to do but succumb. 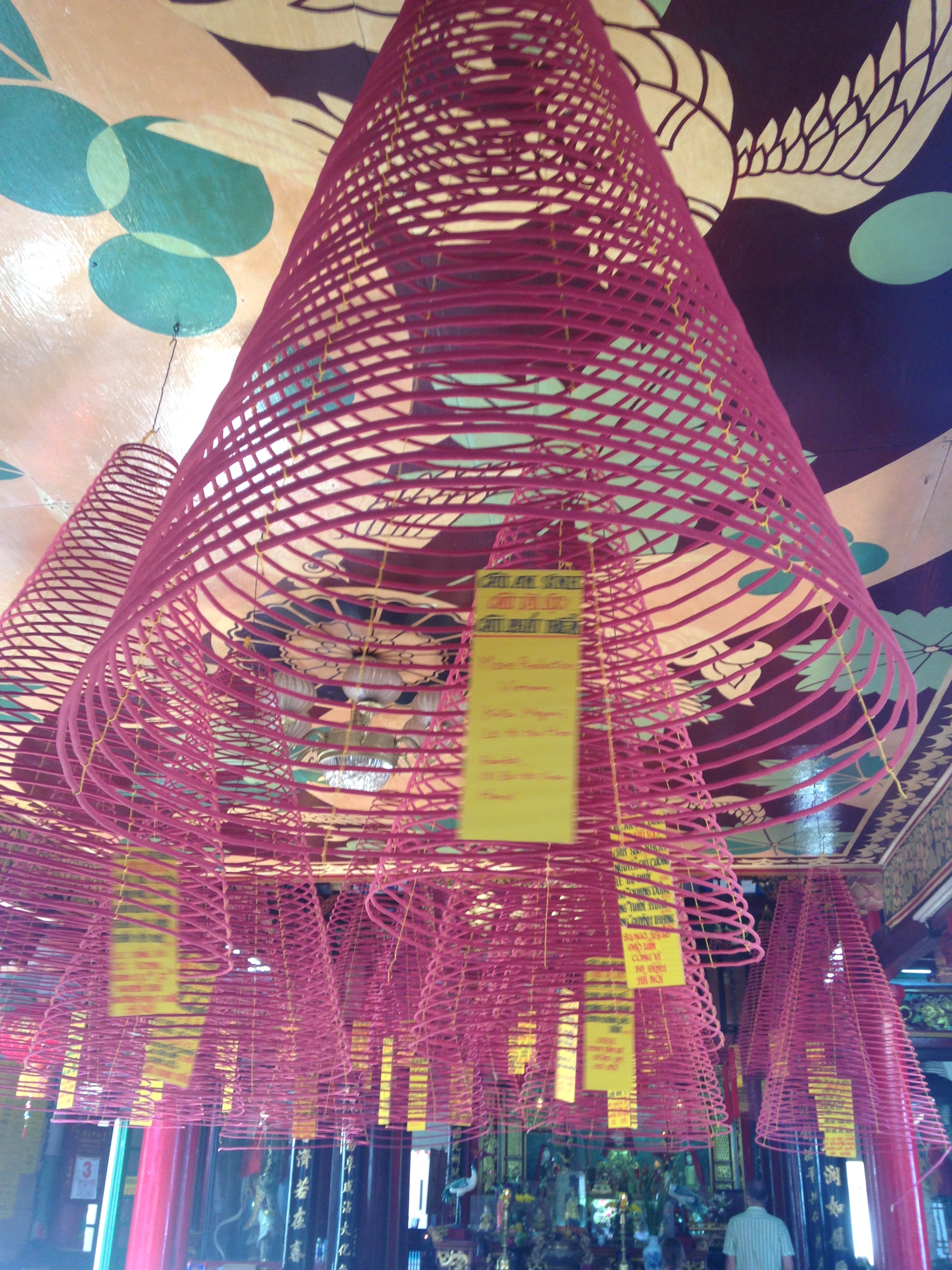 The cities of Vietnam are busy places. They are filled with entrepreneurs who sell everything from food to clothing to knick-knacks. Most of them have a little stall inside one of the giant warehouse-like markets, smashed all together in tight little rows. Take care to keep your arms tucked in tight to your sides as you side-step through the narrow rows, otherwise you might be grabbed and pulled toward the colorful piles of stuff by an overly pushy salesperson. 91% of the population drives a motorbike and there seems no better place to park them than on the sidewalk, sometimes two rows deep as in Ho Chi Minh City. Pedestrians are forced to walk in the street and pray the speeding bikes will not clip them as they roar past. There were days when I could take a deep breath, join the fray and be energized by the frenetic energy and there were also days I felt so over stimulated that I thought I was going to lose my mind.

Within the chaos and madness, however, each city also has its charms.  Ho Chi Minh City, formerly Saigon, is the most modern of the cities we visited. After the destruction from many years of war (1955-1975) it has rebuilt itself with modern high rises and several large, fancy malls. It has hundreds and I mean hundreds of coffee shops where you can get free Wifi as well as the famous Cà Phê Sūa Dá or Caphe Den Dá. Both are best iced, Sūa Dá is iced coffee with condensed milk and Den Dá is without but both have added sugar. Take my advice and do not make the mistake of holding the sugar, the thick, strong beverage desperately needs it. I could not stomach the Den Dá but after a few Jacob developed a taste for it and sought it out daily. I immediately loved the sweet creaminess of the Cà Phê Sūa Dá, which was odd since I normally take only milk in my coffee. There was just something about it that was like drinking a shake made of a mixture of coffee and mocha flavored ice cream.   I looked forward to one every morning.

Ho Chi Minh City is also super kid friendly. There are several parks and playgrounds to entertain the kids and give them the needed break from experiments in street food and museums. Like most cities with hot climates, Ho Chi Minh comes alive at night, especially in the park. You can see women of every age boppin’ away at aerobics classes, couples can be found spinning inside of pavilions practicing their ballroom dances, adults and kids play Badminton, Soccer, and what looks like a game that is a mixture of Badminton and Hacky Sack.

The girls would probably say Ho Chi Minh City was their favorite because it was the only city where we found playgrounds, although if you were to remind them of the beach or the dragon bridge of Da Nang in Central Vietnam, they would probably change their tune. For most people Da Nang is only the necessary train stop on the way to the more popular and beautiful city of Hoi An. However, Da Nang is working hard to change their fishing port reputation into a high-end beach resort destination. I have a feeling that the giant golden dragon that dives in and out of the bridge between the downtown area and the beach is setting the tone for what is to come. At night it changes from gold to green to blue to purple to red. Some might say it is a bit over the top but we thought it was a pretty cool backdrop to picturesque promenade that snakes along the waterfront.

There are also dozens of high-rise hotels under construction along the beaches of the city. It will be interesting to see Da Nang in ten years when they are all completed and then check out how many more people can pack into the small areas along the coastline that are designated for swimming. If you can manage to stake out a spot for yourself in the water it is a good time for sure but don’t expect to be able to do much else besides jump and splash in the waves. However, the throngs of people also present the opportunity for the best of the best in people watching. You can rent a beach chair with umbrella all day for a dollar and kick back to watch the sales lady meticulously setup up her tower of colorful kites blowing in the breeze or the many women who jump into the waves fully clothed.

We only gave Da Nang two days preferring to move on to the famous World Heritage city of Hoi An and it is certainly deserving of this fame. The old quarter of Hoi An is protected from motorbike traffic certain hours of the day, which makes it a safe haven and very pleasant to walk while you visit the mythical covered bridge and many museums. The French Colonial influence of the architecture is very apparent in the boxy buildings with tile roofs. It is romantic and magical at night with cloth lanterns of every color strung across the streets. Historically, Hoi An was a trade port between the Vietnamese, Japanese and Chinese people and you can see all three of these influences throughout the old quarter. My favorite was the Chinese Assembly Hall. It has magnificent red doors and jade colored tile on the sweeping roof where statues of dragons dance on each tier.

There are giant cones of incense burning from the ceiling inside filling the room with the sweet scented smoke. Families buy these cones to remember their deceased loved ones and I’m not exactly sure but it must take at least a week for them to burn down completely.

I haven’t decided yet if UNESCO is a good thing or not. What I have noticed is that once a place receives this designation it becomes overwhelmed with tourists. This designation certainly protects the historical nature of a place and brings more money to an otherwise impoverished area but it also brings more pollution, waste and higher prices. Hoi An is a good example of the jacked up prices, especially for food, due to the coveted UNESCO designation. The restaurants in the old quarter charge sometimes double for the same plate of food you can find just a kilometer away. One woman tried to sell me a pair of shorts for Mackenzie for five times what I knew they were worth based on an earlier quote for the same pair just outside of the old quarter. I stuck to my number though and as soon as she saw was ready to walk away she finally caved (I guess haggling is part of the fun but I would rather have an honest dealing, myself). Our hotel provided free bikes and on one of our days we took a spin through the rice patties that surround the city. I have never seen this shade of neon green that radiated from the landscape and the word undulation must have come from watching the breeze blow through the soft grass of the rice fields.

Hanoi and Sapa were the last two places we visited in Vietnam. We did a trek through the mountains and terraced rice fields in Sapa. It was truly one of my favorite experiences on our world journey so it gets a post all its own (stay tuned). Hanoi, in Northern Vietnam is the capital city. This is a city you truly have to just take in and try really hard not to get overwhelmed. It is a beautiful city with a big lake in its center that is surrounded by a lush green park (no playground) and walking trail around it. The noise from the traffic is muffled here and provides a nice respite. I gotta admit, I didn’t love Hanoi. It is by far the most polluted of the places we visited and I found the motorbike drivers to be even less patient with pedestrians than other cities. I don’t know how many times I had to stop suddenly while holding onto Quinn’s hand because a motorbike pulled in front of us to park on the sidewalk. A woman selling some kind of donuts tricked Mackenzie and me by putting the sticky ball into Mackenzie’s hand and saying, “just try” and then she charged me for it.

These annoyances aside, we found the best Banh Mi sandwich here of all the cities in Vietnam. The girls thoroughly enjoyed the famous water puppet show that originated in Hanoi. We understood nothing because it was in Vietnamese and it was slightly strange but the music was amazing and after the first couple of scenes we were all into it. We also made a visit to the Vietnamese Women’s museum, which honored the mothers and women of Vietnam by exhibiting examples of their strength and leadership.  It provided us with an understanding of the tribal women in the north before venturing further to Sapa.

Night trains, rice fields, jungles and overly populated cities. Vietnam was a wonderfully maddening experience, if that is possible, and I have no regrets about our visit. There is good reason the food is known as one of the best of the world’s cuisines. With the median age of its citizen at 28 years old, I have a feeling Vietnam is in the midst of growth and rapid change and I hope they receive some pressure to change their emissions laws. It will be interesting to see how this country continues to emerge in the global community. If you have any question about visiting at least go for the Bún Thįt Nuóng, Caphe Su Da and Kumquat Lemonade.