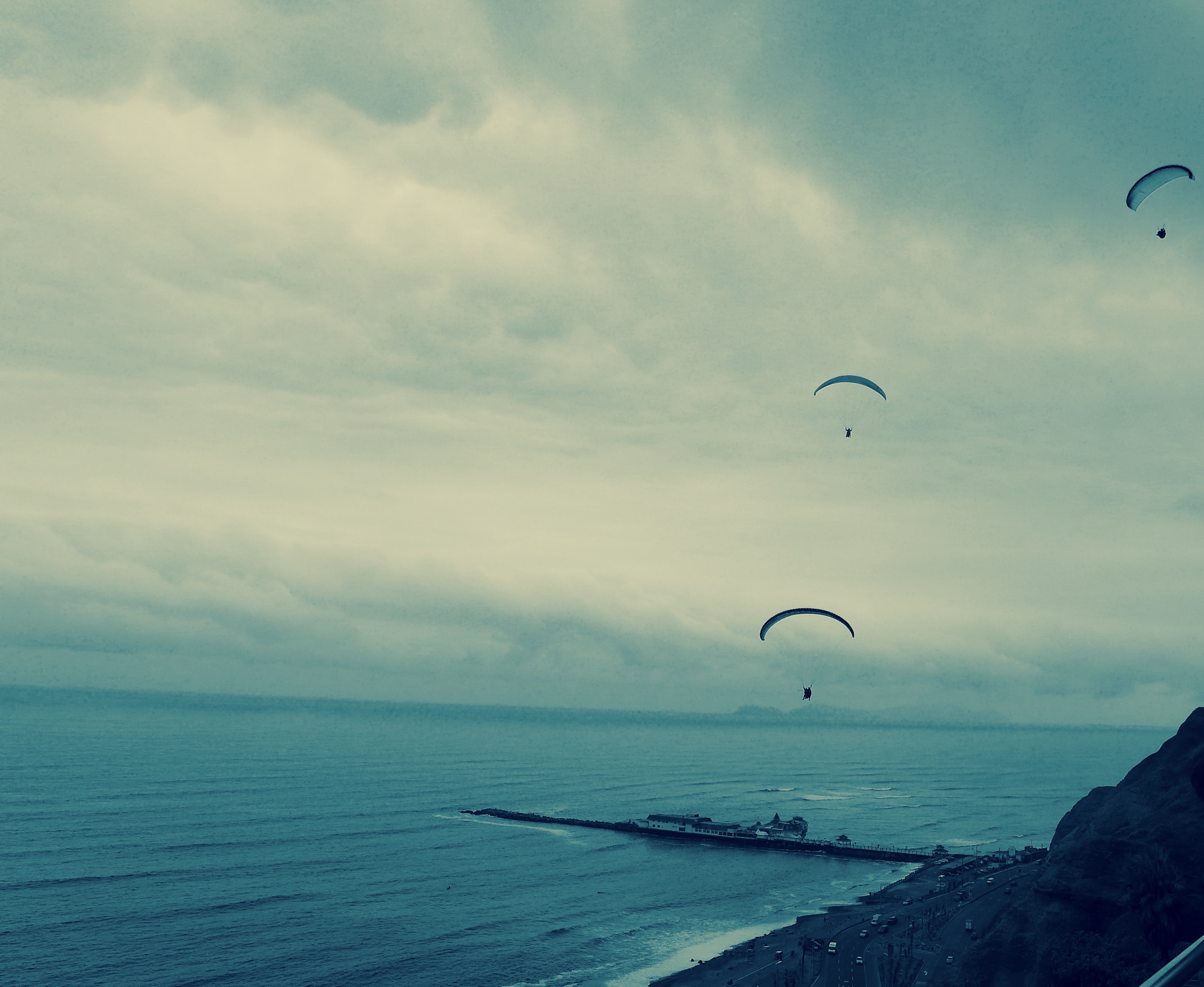 We arrived on a morning flight for our second exploration of Lima. I won’t gush about the apartment we rented like the one in Barranco, because frankly, it was a complete dive. But, as they say, it is somewhere to lay your head. How bad was it? None of us felt we could walk around the apartment without shoes on. Maybe our apartment tainted our joy for Lima or the fact that we passed a stomach bug between each other for a few days, making excursions all together difficult but our second trip to Lima was definitely not as glorious at the first. Lima does not have an easy to navigate public transportation system; therefore, we decided to jump on the double-decker city tour bus to get an overview of the city, plus the girls had been begging to ride one for the last month. The tour bus took us around Miraflores and then headed to downtown where we could see the Plaza de Armas and various other historical sites. While good in theory, viewing the city in this way was not so good in action.

The traffic is HORRENDOUS in Lima. This may be for many reasons, but I am sure it is mostly because the traffic laws seem to be optional. For example, if one would like to make a left hand turn across multiple lanes of traffic, it is socially acceptable to start your turn while traffic is moving and stop in the middle of the lanes until the way is clear or other drivers finally concede to your action. The same is true of making a right hand turn. If you realize too late that the street you need to turn right on is now here and you are in the center lane, it is perfectly acceptable to go ahead and make that turn in front of your neighboring car by just making a quick honk to communicate your desire.

There we were in bumper-to-bumper traffic on the top of the double-decker bus, choking on exhaust fumes but making the best of it by marveling at the buildings and pure chaos of the streets below. The best part of the tour was when we finally arrived to Museo del Convento de San Francisco de Asis de Lima the only hop off destination of the “hop on hop off” tour. The church of San Francisco was built in the late 1600s and houses the remains of over 25,000 people in the catacombs. The girls were disturbingly interested and unfazed by the creepy, dimly lit underground maze, dank smell and displays of human bones and skulls. It provided a great lesson on the cycle of life for girls including more existential topics such as heaven and earth, spirituality and religion and differing beliefs on the subject. We were toured all over the church from the library, complete with iron spiral stair case leading to the high shelves of books, to the music balcony where we were able to voyeuristically watch some of a small wedding ceremony.

By far our best day of round two was the walk to a highly praised, very fancy cevicheria called La Mar. Jacob and I ordered the recommended ceviche dishes along with a plate of calamari and octopus sautéed in a sort of barbecue sauce accompanied by roasted Choclo, a type of giant corn found all over the country (you can find most often as street food. Venders, steam it in the husk and serve it with a slice of fresh cheese).  We made a new ceviche aficionado out of our oldest daughter and our youngest was happy to stick with her beautifully cooked Mahi Mahi (no complaints there in the least). Jacob and I sampled the Pisco Sours, which are tangy, frothy, go-down-way-to-easily drinks that remind me of my Dad’s famous margaritas (he does not taint the tequila with margarita mix, lime juice only baby). Let the buyer beware before ordering your second  Pisco Sour, there effect sneaks up on you! Good thing we were walking.

And walk we did! Miraflores has a lovely greenbelt with trails along cliffs that parallel the Pacific Ocean. There are playgrounds, green fields and sculptures that dot the way, beautiful views of the coast despite the clouds and intrigue as paragliders dip up and down in the sky.

Lima is a complex city and like all of Peru home to warm, friendly people. Infamously known for its crime and traffic but with hidden gems of neighborhoods that are trying, successfully, to enter the modern era. If we were to go back and I imagine one day we will, I would stay in Barranco or in a better part of Miraflores instead of the business district. The city is huge and I am sure even with the eight days we were there in total, there is still so much to see, do and eat. 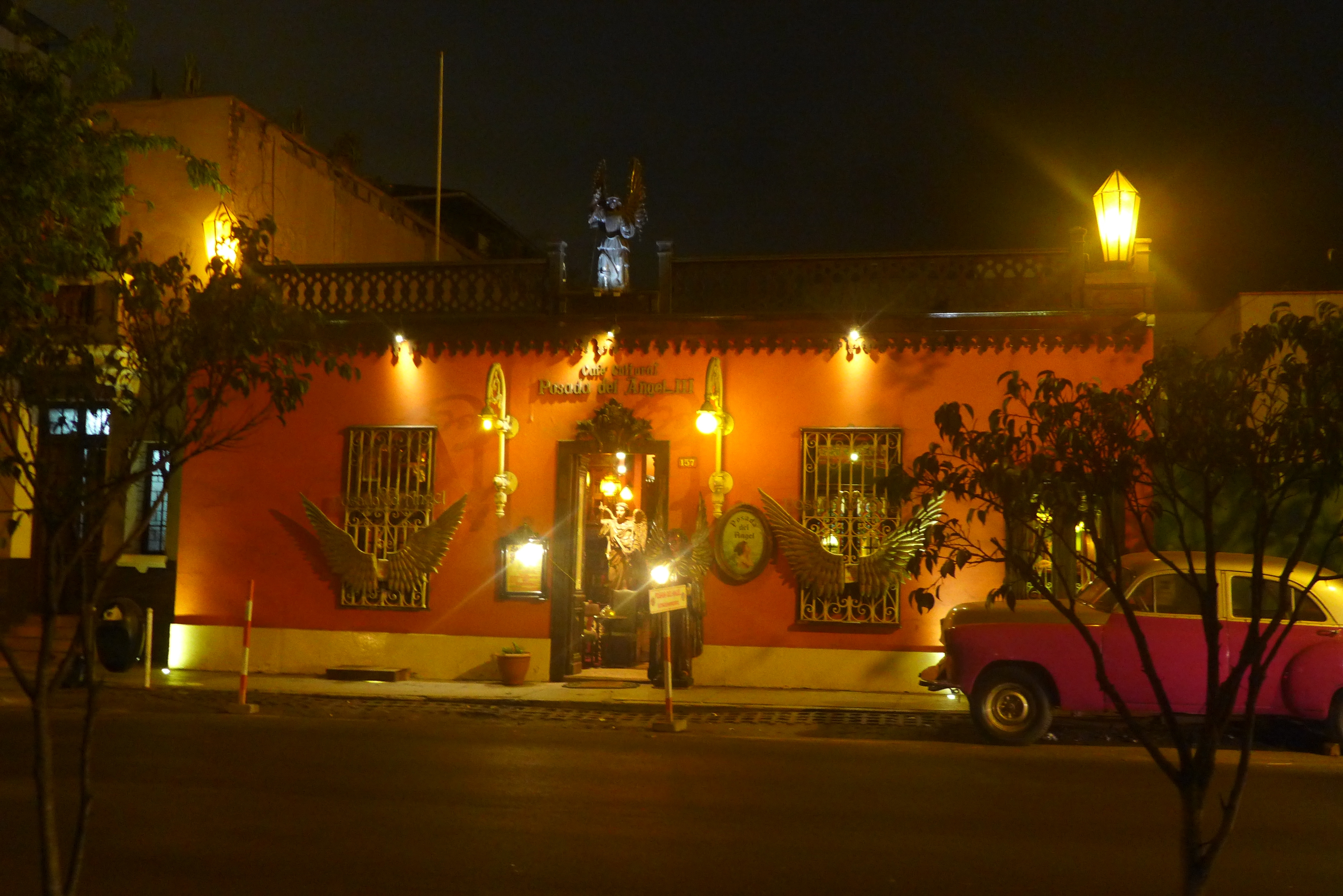 Sergio, the owner of the apartment we rented in the Barranco District, picked us up at the airport at 8:30 on a foggy night in Lima, Peru. With the girls asleep, one on each of my legs in the backseat, I watched out the window as Sergio weaved in and out of the crazy traffic, the cacophony of horn honking serenading our journey. I felt very grateful for my sleeping daughters, otherwise their moans and complaints of motion sickness would have added to the din.

We only booked 3 days at the apartment so that we could quickly move on to the Sacred Valley before the rainy season socked us in at Machu Picchu. We filed in, sleepy-eyed and thankful to be able to crash in fresh beds. Arriving at night can be so nice because when you wake up in the morning you get to discover your new place with fresh eyes. The girls were ecstatic because they each got their own rooms, albeit small but still quite a luxury from sleeping on bunk beds in the living room in Panama. Our apartment was in a great location, within walking distance to the main plaza in the Barranco district.

us Barranco is a very safe neighborhood at night and so we did not hesitate to participate in the nighttime energy in the plaza. It comes alive with street vendors and people out wandering about in the warm lights that wash everything with a cozy, welcoming glow.  Jacob fell in love almost instantly as we wound our way through the streets and across old bridges taking in views of the ocean and huge modern sculptures of animals made out of wood and recycled materials. We found the best street empanadas with golden flaky dough filled with beef and sweet caramelized onions for 2.50 soles (about .80 USD) sold by a sweet Peruvian woman on the corner at the entrance to the plaza.

On our first day there, I could tell we were all starting to get the hang of this traveling thing as we whizzed around a local grocery store stocking up on a few items to cook at home. Mackenzie and I had fun picking out new fruits and vegetables we hadn’t seen before. We came across an appealing looking yellow fruit sort of in the shape of a tomato if it had been crossed with a bell pepper (later learned it is called Cocona which is a fruit from the jungle) and of course had to buy the purple corn. I had it in my mind that I would take the corn home and treat it like the yellow corn I am familiar with, boil it up, cut it off the husk and fold it into the rice and beans we had planned for dinner. So, there I am watching this corn bubbling in the water turning it a very deep purple but not getting any softer. Ten then twenty minutes go by and the kernels are still hard and dry. “Jacob! Better look up this purple corn and tell me what I am doing wrong!”

It turns out this corn is not intended for eating. It is for making Chicha Morada; a favorite local drink that is served in almost every restaurant in Peru. The corn is boiled in water with pineapple rind, lemons, cinnamon and cloves to make a delicious, smooth, sweet drink that is reminiscent of the flavors of the holidays. Plus, the purple corn is known to have more antioxidants than blueberries so it’s healthy too! I am sure the sugar that you add only increases the health benefits. Well, I didn’t have quite the right ingredients to make Chicha Morada the traditional way but I threw in the tomato-pepper, which had a lemony, acidic flavor and some essential oils of cinnamon, cloves and orange that I had along, some sugar and viola! Not Chicha Morada.

Not only did our stay in Barranco teach us about Chicha Morada but chicharrón as well. An Uber driver told us about one of his favorite restaurants to get the chicharrón sandwich called El Chinito. This restaurant was hidden in plain sight on a busy street in Barranco, crammed in between a wall of other stores and businesses. Amazingly, they fit an iron spiral staircase and 5 round tables into this tiny place where 3-4 people can cram themselves around each one to enjoy the delicious slow cooked meats this resturant has to offer. When we arrived, the owner could tell we were El Chinito virgins and took our taste buds on a tour offering samples of each kind of meat. From pork with various rubs to slow roasted turkey but the favorite for all of us (even the girls) were the crunchy on the outside tender on the inside ribs of the chicharrón. It was an intimate experience as the other patrons had front row seating to the drama as we tried to understand the Spanish descriptions of the food. Of course we ordered the chicharrón sandwich, which is juicy, salty sliced pork belly that is that is laid atop thinly cut, soft and crispy sweet potato slices. It is garnished with a tangy onion slaw that gives the needed acid to the already decadent sandwich. All this is piled into a perfectly crusty French roll and served with none other than Chicha Morada. Oh, wow. I am now officially a foodie.

After our first full day in Barranco, Jacob and I knew we had to come back and stay in Lima a bit longer, neither one of us realized how much the city would intrigue us nor how much good food we would find there. Sadly, Sergio’s apartment was not available for our return (its no wonder, it is priced at such a bargain and in prime location I am sure he has it booked all the time). We booked another apartment in the neighboring Miraflores district for 5 nights upon our return from the Sacred Valley.  With lessons of local cuisine on our taste buds and continued practice of Spanish on our tongues, we felt prepared for our Sacred Valley adventure.  We said goodbye for now to Lima and boarded our plane for Cusco.